“What’s going on with “The Sims 4″?” A collection of recent events in The Sims social Media.

There has been little to no news about The Sims since early March when they released The Sims 4 My First Pet Stuff and The Sims Mobile internationally.

My First Pet Stuff was received in an “underwhelmed” motion from the community. Many people were protesting that the content resembled simple recolours from the earlier “Cats & Dogs” expansion. However, as you can see in my review here, I feel like I gave the Stuff pack more credit than most simmers.

This left the Sims players thirsty for more information and add on’s for their game.

The only information we have received “officially” is that a new Sims 4 “experience” will be hands on at EA Play in Hollywood this June just before E3 kicks off.  Further to this; some EA Game Changers and some of the big Sims Content Creators were invited to EA Play to experience and report on the excitement happening at the event. Only two Simmers were included from Australia, myself not being one of them. Maybe next time.

Aside from rumors and silence, there really hasn’t been any movement in the EA office as far as we know.

Main Events on Twitter and in the EA Community;

Since Drake has left there has been a silence over The Sims Team. Following that our favourite SimGuru, Liz from EA Sydney, has also resigned leaving her position as Community Manager of Asia Pacific. It’s very sad to see her go, now that our Australian Forums and also our Australian Community Manager are now no more. Her position is still up on the EA Careers website and we wish her the best in her new role!

-Many new SimGurus joined the Mobile team to help the influx of queries regarding the International release of the Mobile game in March. See the full list of current SimGurus on Twitter click here.

– SimGuruDaniel was “laid off” after working in The Sims team for 20 years. His tweet below speculates that his departure was not his choice. We wish him all the best in his new endeavors. 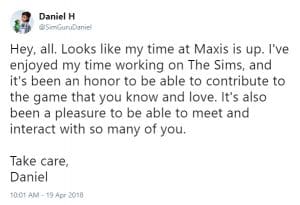 And today’s wonderful news is that SimGuruKate has been appointed the new Community Manager for The Sims 4 as of today. We wish her all the best in her new role! 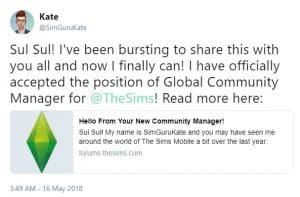 I’ll be sure to keep you up to date with more news as it comes around.